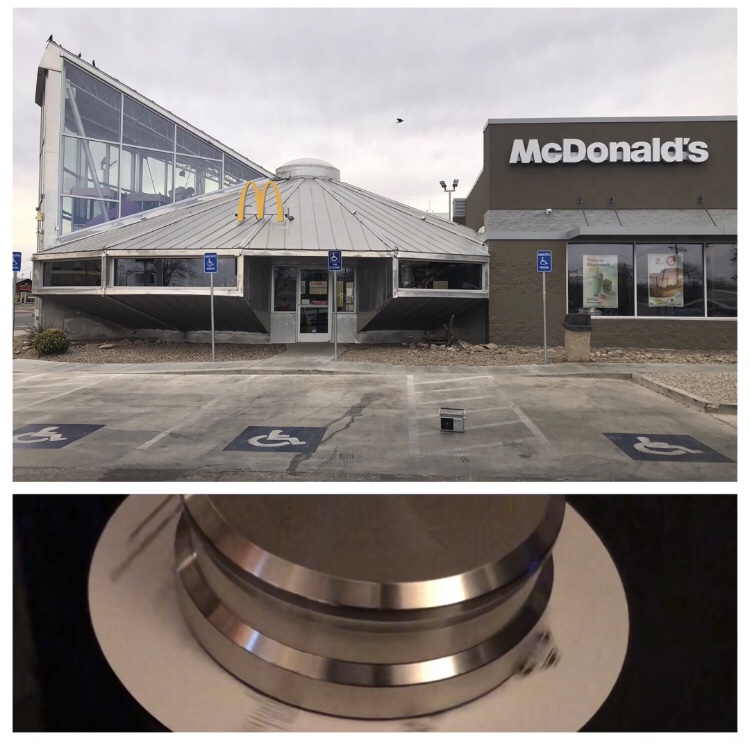 I sometimes wonder if Roswell, New Mexico was the most affected by news from The Pentagon which confirmed the existence of U.F.O.’s.

Roswell has leaned heavily over the years on the questioning and the belief in life forces outside of our planet. That which is extra terrestrial. The welcome signs into town focus on silver intergalactic spacecraft filled with little green or silver beings. Many businesses use the same tactics to attempt to lure visitors and residents alike through the doors.

As someone who admires a great roadside attraction, I also want to make the most of my time in finding that which represents either a person or communities passion or obsession. In Roswell, I think that the Spaceship modeled McDonald’s. It is both easily identified by design from the road as well as built with a sense of permanence.

I think that some of the best attractions are the ones that seem built to last.

Juxtaposed to the topic of permanence are the ideas of advertising slogans and themes. In my studies through college, my communications classes would promote the idea of crafting advertising campaigns that represented a person or business. These would be mantras that even when copy written, would last for a season or two. Long enough to establish a thought, yet fleeting enough to make way for the routine transfer of the guard that arrives at a new season. Further, many advertising campaigns will do their best to present a jingle that sticks with their customers so that any time a sonic note plays, you are transported to thinking about said company or product/service.

McDonalds has had quite a few seasons since it’s founding in 1955. The multi-national corporation has become a staple in many countries around the world. Franchises have expanded not only name/brand recognition, but the physical property of what can be described as an empire.

In the 2003, the slogan “I’m lovin’ it.” came to fruition as 14 internal ad agencies were tasked with providing the fast-casual conglomerate with a Million Dollar Idea. What resulted was the slogan and a catchy track.

So, our track this week is indeed Justin Timberlake’s 2003 track by the same name. The ad campaign would try to link the slogan to a track on Timberlake’s second solo album after his boy band career.

I don’t know if Roswell, NM was ever more affected by UFO confirmation, but I still think that it’s a worthwhile stop with an interesting take on what it can mean to be both permanent and temporal.