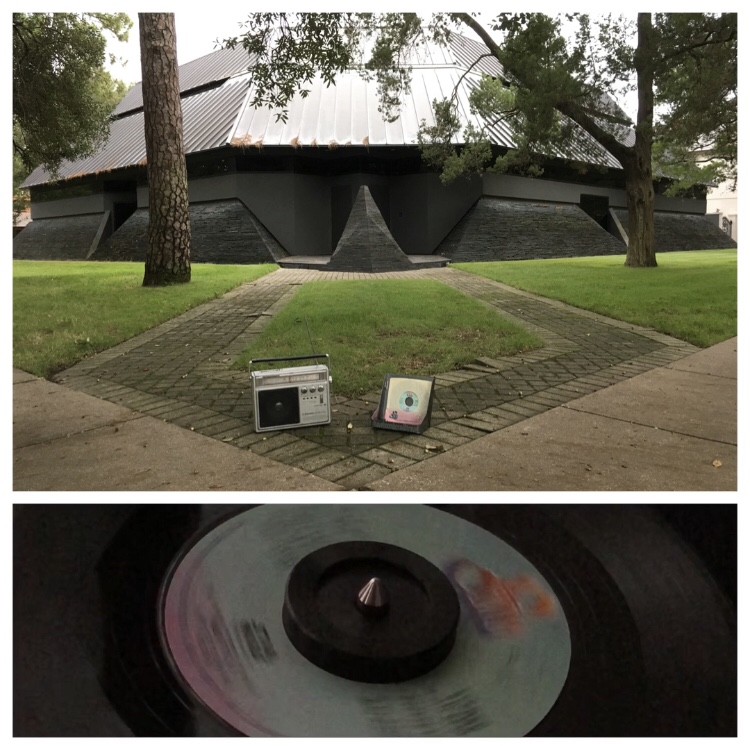 I’ve seen my share of horror films that talk about the haunted house up the street. Houses that set a scene for some horrible tradgedy that becomes the basis of an urban legend. This week, we aren’t exactly featuring one of those houses. Instead, in honor of the first week in May arriving, I took a stellar approach in planning for the post. Shown here is what I and many Houstonians affectionately call “The Darth Vader House”.

So as we prepare to say “May the 4th be with you”, Party like a Cantina Band Musician and hope to bypass any “Revenge of the Sixth”, I hope you are able to appreciate the modern architecture of a home in West University.

The urban legend I am privvy to lands in the history of the private residence property near Buffalo Speedway and University Blvd. The home was allegedly built by a surgeon in 1991 to be modelled after the mask of Darth Vader. The design lends it’s way for natural light to arrive through a row of skylights near the top of the unique structure. The entrance is surrounded with a walkway structure that maintains the angle of the front of the home, complimenting the rigid though sleek structure.

Houston’s lack of Zoning guidelines is pretty evident, and even the annexed City of West University, where the structure sits lends itself to parties with enough cash to flaunt their offbeat designs. To be clear, that is not a complaint; I think places like this home are perfect examples of how Houston has been enriched over the years by passionate residents.

When I was growing up, there was a large debate within the West University area about preventing a specific high rise from being built in the area. If you grew up here around that time, I am almost certain that you saw all of the signs in people’s yards opposing the construction. The graphic which accompanied the signs included an animated high rise building with furrowed eyes, sharp teeth and arms spread wide in a “frightening” position towered alongside the yard sign text. I have included a modified version of the sign as to not direct you to the site the yellow yard signs supported. If you want that address, I am sure you can find it.

I am not at a point that I would tattoo that building image, but it lingers in my brain as a memory from driving up and down Bissonnet. It was styled in a way that reminds me of illustration from School House Rock. It was a black and white image printed on yellow campaign sign materials, faded from the sun in some yards sitting months on end. Even as the specific high rise was ultimately built after a court decision in 2014, despite reservations from certain members in the community, I still see signs in yards. I don’t know if there are still campaigns for issues surrounding the specifics or if homeowners just want their point to be made.

For as long as I can remember, West University has been an affluent area of town, filled with young successful families raising children and doing well for themselves. The trees are deeply and broadly established in the area, lending way to a pleasant if not constant level of shade. It is a more luxurious area of town filled with nice families who register their kids for little league and still prioritize eating weekly at the local diner/cafe. I don’t really see West University as a Norman Rockwell Painting, but in terms of Houston landscapes in the City of Houston, “West U” is the closest to have my vote for that award.

Rockwell painted vignettes of relatively much simpler times in terms of the number of distractions that we present ourselves. That is not to discount the social and political issues present in the world, but what Rockwell most eloquently captured in his art were interesting people appearing to discover things about themselves or the environment around them.

Today, I fear that we have lost a desire for discovery of ourselves outside of a social media persona. We can glorify the past time of a road trip all we want (and I do, frequently) but 4, 8, or twelve hours on the road without a phone (as a passenger), conversation or music and I promise it is a different experience than a journey equipped. Yet, something about quiet introspection is calming to me. No need to fill the space with small talk. Believe it or not, I am not always an extrovert. I balance many moments in my personal life with quiet nights in. I don’t know if that is an intentional part of my self care routine, but I recharge and reconnect.

I am right on the tail end of having non electric distractions and still knowing how to operate electronics. I didn’t have my own laptop in school, but we did have computer class. I can both write in cursive as well as make it through the rapids on Oregon Trail. I can both burn a wicked Mixtape on cassette or CDRW, as well as make a playlist on Spotify. If I am using the Star Wars theme, I think this is as close as I have gotten to really ever “using the force”.

Star Wars tried to reboot as a franchise in many ways when I was in late elementary or early middle school. I in no way claim to be an expert in the matter, before I start getting emails. I never really followed along with Episode 1 and that line of the series. There was apparently an attack of the clones, but I was caught up in my own life to have given the consideration most Jedi’s, Sith Lord’s and Storm Troopers would expect. But, the initial trilogy captivated me. There is wonder at the magic of cinematography that the now Disney owned franchise presented.

I found this awesome Star Wars 45 at a Record show in Houston that happens monthly. There is a good mix of Rock 33’s at this specific show, but something told me to start looking at the 45’s and I got some sweet gems, all for relatively cheap. The vendor asked if I had a jukebox because many of his customers searching the piles were looking to fill their machines. I told him that I didn’t, but that I was pleased with finding some of the music from my childhood.

Star Wars made commonly accessible for many the narrative of choosing a path for your life, honing your goals even if that means introspection, and working toward your dream. It encourages unlikely heroes and relied more on relationship than action to carry the film, even when chocked with both. As I look toward this 5/4, I want to keep in mind that last part and be thankful for the house near Buffalo Speedway near University Blvd.