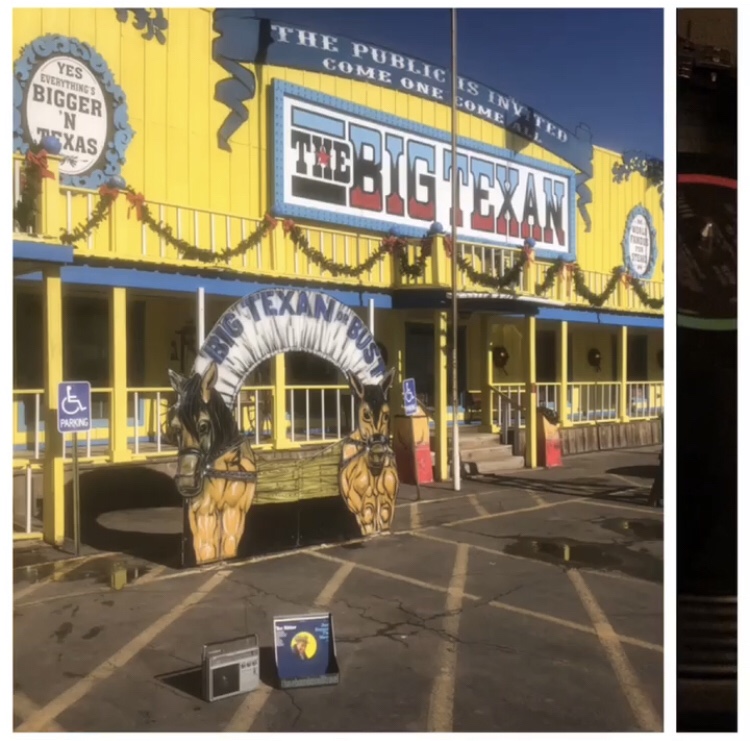 When I left for Amarillo, I was really in search of 2 major locations that I had built up in my mind. The first was Cadillac Ranch. The Second was The Big Texan Steakhouse. Both had their own Tall Tale status in my mind and honestly, I don’t know if you can make it through Amarillo without being tipped off that there is a free 72 oz. steak available if you finish it in an hour or less. Signs are everywhere.
I am a big fan of the show “King of The Hill” that has a memorable episode dedicated to mentioning a similar  restaurant and challenge. To be fair, the Cadillac Ranch is also mentioned in the cartoon created by Mike Judge as well. I’ve been compared to Bobby Hill a time or two in my day, as I grew up a husky blonde kid with short hair in Texas who danced to the beat of my own drum. I never know if that was a compliment or a taunt, but I just went with it.

The Big Texan possesses all the glamor I could imagine as a blogger and photographer. In many ways, it stands out as a beacon on the side of a highway, signaling tourists to stop off and give the contest a shot.
When you walk inside the restaurant, there is a display of just exactly how big 72 oz. of steak is. It’s basically the size of a refrigerated section pot roast of your preferred super market, cellophane wrapped like a bundle I have seen on police show drug busts out for display. I am sure there is a nip and tuck involved on the packaging as the fully cooked version spreads across a platter like the shape of America. When you see it, you might be confused on whether you should take off your hat for a moment of silence.The restaurant has a stage platform for you to eat the steak on, assuming you accept the challenge. The waitstaff charges your credit or debit card for the meat before you start and announce to the restaurant of your quest in all the glory a waitstaff announcement such as a birthday or anniversary could yield.

There is a countdown clock that runs red on the wall so that between meat sweats you can figure out exactly how much time you have left to consume the meaty monstrosity. The menu boasts of the record breaking champion who is the size of a young tree branch. “Who does this?” I asked myself, as I arrived for a brunch time meal. I ogled with envy when my “breakfast steak” (Copywrite Red Bandit Media, 2019) arrived. I knew that I wasn’t here to take on the 72 oz. challenge this day, as there was a mighty road trip back to Houston quickly in store. But, there was someone who stepped up to the stage, with all the bells and whistles of a waitstaff attempting to corral attention in the large dining hall lined with the mounts of no less than 15-20 Deer and Moose.

There are a fine list of rules that are to be followed when taking on the 72oz. challenge. They can be found here. It is not just the steak itself you are finishing, but also a shrimp cocktail, salad, baked potato, roll and butter. You get one bite untimed to see if the steak is cooked to your liking. Also, wisdom from “King of The Hill”;

You don’t have to eat the fat from the steak, but judges will be monitoring in their assessment of your completion. For those who succeed, the restaurant keeps a log on competitors along with comments. If you just need a little pick me up, the comments from past winners can for sure provide you the inspiration you need to achieve your dreams. Those can be found here.

While I found my steak particularly dry rub overseasoned and pretty thin from the idea I had in my mind of what I would receive, I was glad in my decision to not spend $72 to fail at putting a small suitcase of meat through my digestive system this go around. Harry Houdini might have escaped many a challenges in his day, but even he ultimately passed from Peritonitis, secondary to a ruptured Appendinx. Maybe on another trip, if I find myself with an extra $72, an hour and a larger than average appetite or something to prove, I would for sure return and see if I could log boombox into the comment section. In the meantime, I present the idea for you, should you find yourself ready for that challenge.

This week’s track is “Suppertime” by Tex Ritter. The record was a find along the trip, something that I pledged to myself that I wanted to do more of. The album “Just Beyond The Moon” is a very religious take on life at just about every track. Specifically, the featured song starts out with the storytelling of Tex reminiscing about his childhood and getting called inside for dinner before it moves into an analogy into each of us getting called to a heavenly dinner table. It is campy in the way that Tex addresses the listener as “friend”, but in many ways might be descriptive of the journey to Amarillo from Houston by car. Between the driving, the pitstops and more driving, one starts to question existence itself, searches for answers, and pleasantly takes note when you see others along the way.

I don’t know that we gather around the dinner table much anymore these days. If we do, it normally feels like there is a countdown clock until we move onto the next thing. I am learning to make that time a priority again. A way to regain a piece of myself by centering and relearning curiosity as a polite gesture. And because I think sharing a meal every now and then with friend or neighbor is the kind of way I want to live. Even if people like their steaks cooked a little longer than I do. I encourage you to join me in this practice.