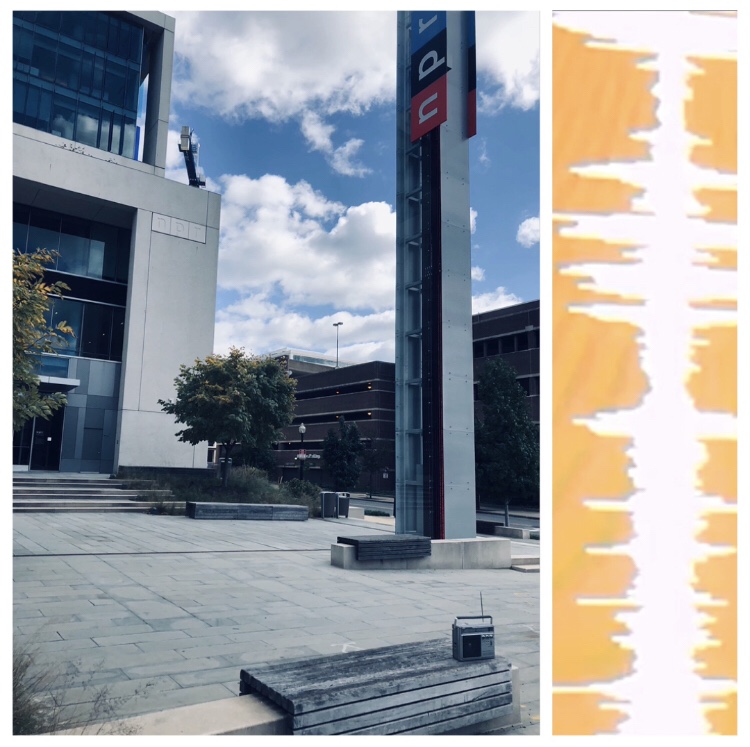 Trying something new this week, as I explore ways to bring you content that isn’t always available on vinyl. The clip this week is audio captured from This American Life’s foray into Television. They had 2 seasons under the same name of a Showtime series that brought some of the magic that they broadcast weekly via radio to air through a visual medium. The program routinely cultivates stories surrounding a weekly theme and is hosted by the talented @IraGlass. More on that in a moment.

My stop at NPR’s headquarters in Washington, DC was almost an afterthought until it hit me that not only did a physical broadcasting location exist, but that while taking a few days ahead of a scheduled work trip I would land in a decent proximity to the location. Maybe it was the nature of radio that made me think these things arrive and return to the ether of our lives as if born out of magic. I both can recognize that programs such as This American Life, All Things Considered, Car Talk, Fresh Air and Planet Money (respectively) are being produced in real time somewhere by very real people before they broadcast and yet I still think that they surprisingly and routinely reach us. Maybe it’s easier to write off my misinformed explanation as I started my listening via podcasts and the one off internet videos. I am still backlogged in listening to the entire This American Life series, but maybe that will continue to evolve across future road trips. Pro tip: If you have a road trip ahead and haven’t subscribed to the “Serial” podcast, now is the time.

I was fortunate enough to see Ira lecture last May about things he has learned along the way of 30 years in Public Radio. He discussed his start as an intern; pursuing something he believed in well before it was polished; shared some of his inspiration and doled out pretty great advice about reaching out for a second opinion every now and again. While I was fanboy-ing out, I recognize that Ira carries a level of humility with him. He still explains who he is to half of an audience when he speaks for all of the companions unaware of the fame you find as a radio personality broadcast on National Public Radio.

I tried to linger at the venue for a few minutes after the performance, special edition DVD series and sharpie in hand. I wanted to thank Ira for his work and how relatable and innovative I have found it, but not be creepy about it. Something about being 6’1″ and waiting for another grown man in a moderately lit outdoor area seemed to straddle that line of questionable for me that night. This American Life introduced me to the work of frequent contributors David Sedaris (“The Santaland Diaries”, “Me Talk Pretty One Day”), Mike Birbiglia (“Sleepwalk with Me”, which Ira had a hand in bringing to film, “My Girlfriend’s Boyfriend”), Sarah Koenig (“Serial”), and the late David Rakoff (“Half Empty”), just to name a few. Airing on the side of caution, my companion and I decide to make an exit. After the fact, I saw a friend (whom I did not see at the show) stayed after the show and scored a selfie with Ira. I was both happy for them and partially filled with envy. But maybe the next time I see a lecture, I’ll decide to stay that extra 10 minutes past my previous limit.

In the meantime, in my journey to NPR I took some time to evaluate part of what I appreciate most about the content that broadcasts. I think that much of their content inspires, including This American Life, an accessibility of art and culture that I once thought inaccessible. What I relate to is that the art that describes nontraditional relationship. The art that provides insight into new perspectives on the world.

I am inspired to continue honing my craft, to present it even if unpolished and nontraditional at times, maybe to inspire, but to be true to the narrative either way. Thanks Ira, This American Life, and NPR for being resources to share the content.