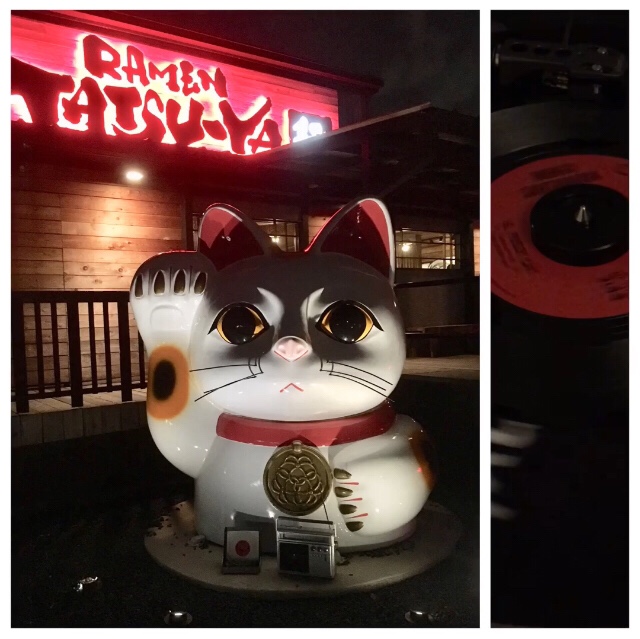 I don’t think anyone ever “owns” a cat the way that we regard most other domestic animals. Instead, you coexist alongside them and hope that it works out for the best. Owning a cat is more like having a passive aggressive roommate who instead of fiddling with the thermostat over and over, decides to knock over cups of liquid while silently staring directly into your eyes as it happens.

I remember coexisting alongside 3 cats throughout my childhood. One that for sure went on to other things after an escape from the life of being an indoor cat my mother’s second story duplex rental on West Gray. I would call out a name that now escapes me in the afternoon before dinner for about a week after the cat went missing. I remember that house because there were pigeons that would roost in the space between the roof and and the ceiling; of what I can only imagine was an attic. I never went up there, but I can clearly remember the soft cooing of the birds as I lay in my bed at night with a small, square, brown plastic humidifier nearby to combat the bloody noses I was often afflicted by. There were dark wooden floors that would creak and I am sure that the downstairs neighbor must have had the patience of a saint or an unwavering commitment to affordable housing. I must have been no more than for or five at the time. Old enough to make quite a bit of my own noise.

The Second Cat I can remember existing alongside was a Tortoiseshell cat that my father either took in after my grandfather on his side passed or may have always had for some time. I remember that she stayed outside, but would eagerly return to the house each day after running around at night. She had the yellow and black eyes that were intense and would shift to focus quickly on any movement. I think that staying outside at night always kept her more aware than any house cat counterpart. She would lay on the concrete garage floor, soaking in sun rays, tapping her thin fluffy black and brown tail with an effortless swish, collecting bits of leaf debris and dust in the fall.

Finally, I remember a fat orange male tabby cat by the name of Hobbes that arrived to the same duplex that had the humidifier, the creaky floors and the occupied attic space. Hobbes was given to us well after his stint as a kitten. He was still young as far as I could tell, and what better way to teach me some responsibility of pet ownership in a place where I couldn’t have a dog? I don’t know if that was a landlord thing or my mother just putting her foot down. Irony is not lost on me that I was a little blonde boy with hair usually rustled out of place from a bowl transitioned into a “surfer” haircut (Thank you, 1990’s) that might have made Bill Waterson proud. What I remember about Hobbes was that he was mostly patient with me. As much as any pet could be, he was mine/ours. Sick day away from school? He would make his rounds and lounge with you. Having company over? He would entertain you by ruining your sweater with hair. He adapted into our patterns, he survived a move away from the squeaky duplex and most of all he cemented a place in my memory.

The sculpture you see in the clip above is a cat by the name of Meowtrose, at the aptly located Montrose neighborhood Ramen Tatsuya. The Austin based chain slings bowls of Ramen that redefined my perspective of dish. For those of you wanting to know, I get the “Mi-So-Not”, extra noodles and a side of Garlic to freshly press into the pork broth based delicacy. I kid you not, I found the dish that I would have wanted to eat every time I took a day off of school. But it isn’t about only craving the ramen when you feel a little under the weather. The dishes satisfy year round and vary well past my usual order. The restaurant has pulled in special events that pair Truth BBQ with Ramen or even paired Crawfish (A springtime Houston delicacy) with their noodles and broth. The line is usually out the door for the specific events, but the location usually has a steady flow of customers who are as enthusiastic about the delicious dishes as Ramen Tatsuya is about taking care of their customers. Meowtrose at first glance, seemed like an obscure and kitsch icon for the dining location by my estimation, but this place truly feels like home when I crave a bowl of noodles and I cannot be more proud to feature it this week.

The track this week is Mongo Sanataria’s “El Pussy Cat”. When I was pillaging through the stack of 45’s and found this, I really thought it was a joke. since it was a 7″ vinyl, I was willing to risk losing the buck or two to hear what might actually be on it. Before I paired the track with Meowtrose, I thought maybe this is the song I need for Houston’s SPCA. I felt like I had options. But, listening to the song, I knew the specific level of absurdity lends well to the creative process I associate with running a trendy and relevant business, food or otherwise. Indulge a little bit and remember to have fun every once and again.

One thought on “Ramen Tatsuya, Houston”