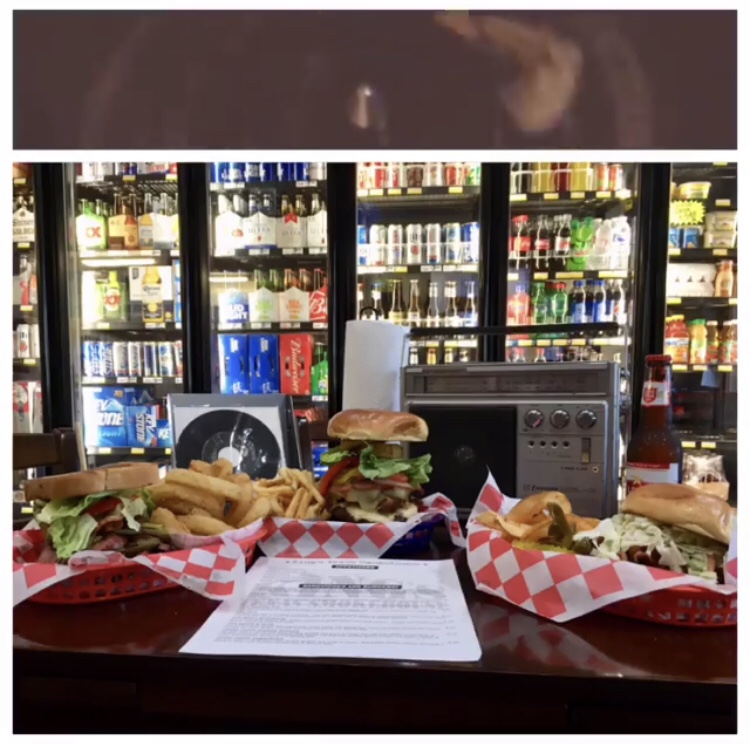 When I graduated high school, I followed a call to Texas Lions Camp in Kerrville, Texas at the suggestion of a person I was dating at the time. When I ended up spending two glorious Summers as a Counselor and Radio Program Activity Leader (even as the aforementioned relationship faded), I was further confident that I could move towards pursuing a life in the nonprofit sector. And I spent a little over a decade loving the work and following a call. Part of that passion included interacting with some of the amazing people I was very fortunate to meet along the way. The ones who provide a solid word of advice or share a story and their time. Steven King was one of those people for me at Lions Camp.

Steven was serving as a Client Services Director for the TLC when I met him, a friendly guy with wit, humor and attention paid to those around. When I won a raffled off rare afternoon outing to golf with Steven and another Director, Glenn, both gentleman didn’t give me too hard of a time when I launched a club airborne from the driving tee. But, it was a pretty good icebreaker. Both were year round staff who oversaw the camp during the winter months and would play a big role in recruiting college aged staff for the Summer Programs during the typical recruiting seasons.

As time passed and I was offered a corporate position with my current private sector employer, it was also at a time when I thought I might additionally apply for an elusive Program Director job at a camp that required a fun video resume. Steven was the first to see me goofball it up, remixing “The Fresh Prince of Bellaire” from the Macbook laptop suite and iPhone set up that I dreamed would one day get me noticed. I had a foot in the door and even was offered an in person interview in the top candidates, but ultimately decided that the corporate route might more effectively prepare me for the kind of management role I was applying to with less experience. In that, I can recognize that sometimes the call we follow changes as time and situations call for new opportunity.

When I saw that Steven was branching out into the restaurant industry, I had a really great feeling that his attention to detail, his personable demeanor, and his understanding of both hunting and preparing game would serve him well.

On the way out to West Texas from Houston, I had an opportunity to stop in at the King’s Texas Smokehouse location in Camp Wood and see the new digs for myself. The location did not disappoint in the least!

Not only does King’s serve as a quality butcher counter with high quality (read; better than your local grocer), but also a spot for really great sandwiches and burgers. I was lucky enough to catch up with Steven as he gave me the tour of the location which proudly produces some of the best Burgers I have seen.

Steven ordered 3 burgers/sandwiches for the table each with a different side of either onion rings, french fries, or home fried chips; “The Beast”, “The Clint” and “The Grazing Pig”. If you are having your mouth water from the picture above, all are featured in the order as displayed.

The Clint came out first and it was at this point that I realized this would be an epic day. The Clint is by far a show stopper. Steven reassured me that he has only seen a few people finish The Clint as it’s almost a full pound of fresh beef, almost every topping you can think of and literally held together by a wooden skewer. This bad mamma jamma takes both hands to hold, will be the envy of your Instagram feed, and can probably feed a table of friends. But, who doesn’t like a challenge? We took footage of me just trying to fit a bite of this masterpiece in my mouth and I might have gotten one good chomp down before I moved to a different strategy for tackling the greatness.

And for the record, we didn’t finish The Clint, even if we gave it a good college try. The picture of the attempt is blurry, just like Bigfoot, to keep you guessing if something so fabled exists or if it is all photoshop. Or, probably because I pulled it from a video of the group sharing a laugh. You choose.

Next up was The Beast, which I would assume might have been a title reserved for The Clint. It was another flavorful bite, though much more reasonable in size by comparison. The snap of the grilled smoked sausage with the onion and jalapeno along with the rest of the burger’s toppings made for a well rounded flavor and texture combination. My money is on this burger as a fan favorite when you aren’t trying to challenge a friend with The Clint. And these onion rings won the day for sides. 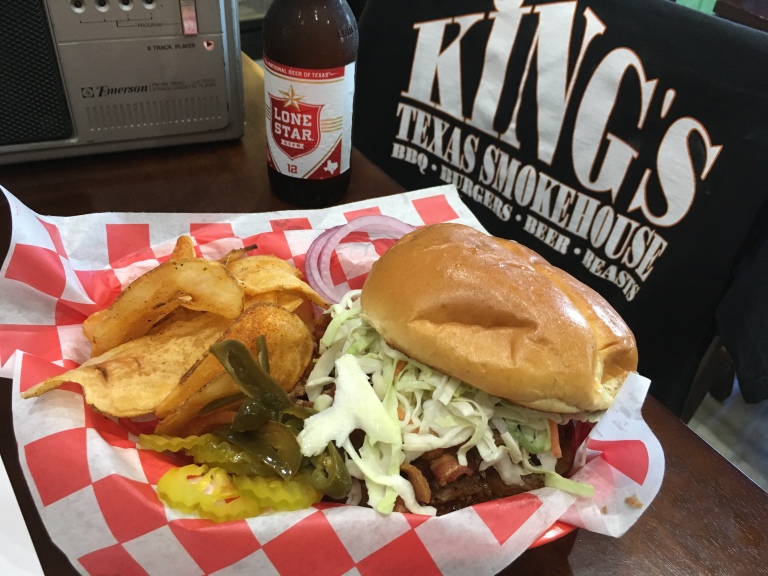 Finally, “The Grazing Pig”, a Pulled Pork sandwich with rough cut cole slaw and crispy bacon. I initially had my doubts about putting bacon on a pulled pork sandwich, but the contrast in textures was a great reminder to let the dish do the talking. This sandwich was a solid and hearty compliment to the burgers on the table.

All three entrees held their own and are a solid reason to make sure you find your way out to Camp Wood when you get the opportunity. On certain weekends, there is entertainment as the location hosts concerts and festivities, all fun and family friendly.

Just as an aside, King’s also sells house made Jerky that will change the future of any road trip you may be taking. Steven was kind enough to teach me a bit about the different kinds and put together a bag for the road out to a destination I get to share with you very soon.

For more information on King’s Texas Smokehouse including location and hours, follow this link. And when you stop in, tell Steven and his crew Boombox wishes him all the best!

Moving along in our theme this week of King’s, the track this week is “Shake, Rattle, and Roll” by Elvis Presley. It’s an up tempo cover piece of a 1954 Jesse Stone tune that get’s us moving. I found it fitting as an anthem for what road trips tend to be. A constant move in one direction or another.

When I was a much younger child, (maybe 3rd grade) I definitely had an Elvis impersonation. The singer was so iconic through multiple stages of his career, and I could curl my upper lip and sway my legs like nobody’s business. A simple “thank you, thank you very much” would make up a great deal of an apology if I was out of turn in a classroom. There was something so smooth and utterly cool about commanding that kind of attention. And when you can make someone smile and captivate a room, I find that there are few feelings much better. I don’t know if there was any video footage of this, but something tells me that I may have done this in a school talent show or theatre production? Who knows?, but this song covered by Elvis fit into the theme this week for me.

Full Disclosure: King’s Texas Smokehouse covered the food consumed in this piece, but the thoughts and opinions of the experience are our own. And I truly you should definitely look them up when you make your way to, around, or near Camp Wood.