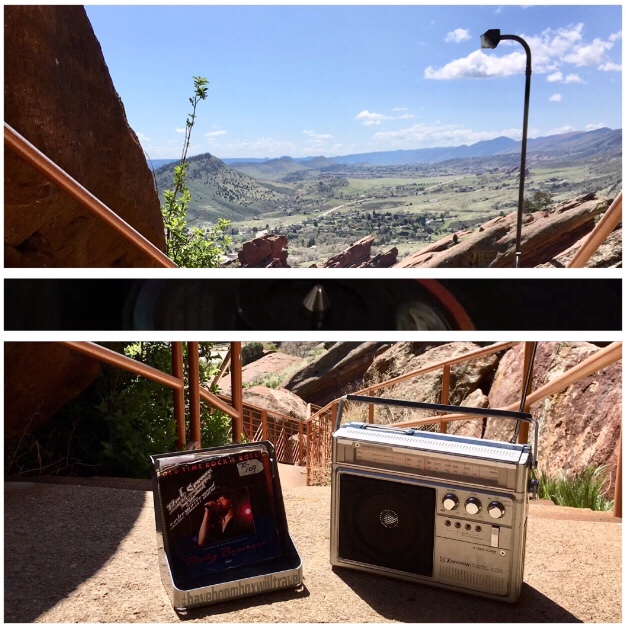 Arriving at Red Rocks Amphitheater felt in many ways like meeting concert venue royalty, even it was in the middle of the day and there was no ticketed event happening in that moment. I don’t know if it was the beauty of the natural rock formations along either side of each aisle, the vast view out toward a neighboring Denver Metro area, or just the fact that the air is thinner at that 6,450 foot above sea level high altitude than the suburbia of Houston I am used to, but it took my breath away. Admittedly, it could have also been the short hike to reach the peak of the aisle entrances that overlooked the vast and panoramic venue.

Walking along the halls of the location, you find the elaborate history of concerts held between the 100 foot sandstone monoliths on either side of a staged area. The design of the 1941 amphitheater (though performers once entertained from a separate platform from the early 1900’s) was partly sponsored as a WPA project that took over 12 years to complete. In 2016, at the occasion of the amphitheater’s 75th anniversary, Red Rocks Park received National Historic Landmark status as administered by the National Park Service on behalf of the Secretary of the Interior.

Showing up mid day to the location awakened a varied experience than most concertgoers who arrive in concert season will find. The same seating area used for shows acts as the launching ground for a dedicated group of fitness enthusiasts. Using the altitude to their advantage, groups can be found climbing the stairs, burpee-ing the length of the rows, or even yoga posing to their hearts delight. The day we arrived, all of the above was most excellently paired with the soundcheck for whatever event would be on the way. The sound booth’s selection (as I am assured has a sonic variety to test the limits of the system) is “Kiss From a Rose” by Seal.

I’ll just let that sink in for a minute. (If you need a reference, find the music video in all of it’s 1994 “Batman Forever” Soundtrack Glory here. I recommend, blaring it at full volume for effect.)

What’s more is that when the soundcheck stopped the song rather abruptly, a loud boo from park patrons from all walks of life arose. Thankfully enough, when given the option of being themselves or 1994 Batman, the sound crew chose 1994 Batman. The music returned, though I can think of little other connection to this song and the park than just being there in that moment; a tell tale sign of a great concert as well.

I paired this week’s post with a little Bob Seger just to make things even more confusing, but follow my train of thought here. Seger provided at least a heavy chapter of the radio play of my grandmother on my mother’s side in the late 80’s and early 90’s. Maybe it was the airplay that Seger’s music got for commercial purposes with “Like a Rock” and the Chevrolet brand. But the unique vocal stylings stuck with me. The Detroit based singer has a gruff “everyman” tone that voiced an unrefined blue collar feel. In that same tone, I felt that Seger was a natural choice for the 12 years of WPA workers who poured their time and effort in creating a creative place for performers to shine below the canopy of stars.

By my estimation “Roll me Away” at it’s core is about finding our own paths, making decisions at each point in the story and living with and making the most of the results, whether you consider what is sown as reward or consequence.

Colorado fits into that category for me. It was a fun escape for a weekend, even if the weather didn’t exactly hold up the way that I had hoped, regardless if I was seeing a show at Red Rocks or not. In “Roll Me Away” Seger clearly exclaims that we’ll get it right next time. I don’t hear lament as much as opportunity in that line. I have a feeling Colorado has not seen the last of me yet.

Finally, I picked the track this week because what’s a little Old Time Rock without some Roll (Me Away)?

Yep, I worked hard on that one.

P.S.; BYOB Boombox Contest has had some great contenders so far. Don’t forget to get your submission in by Labor Day and winners will be announced soon. Email all entries to rperry.713@gmail.com .