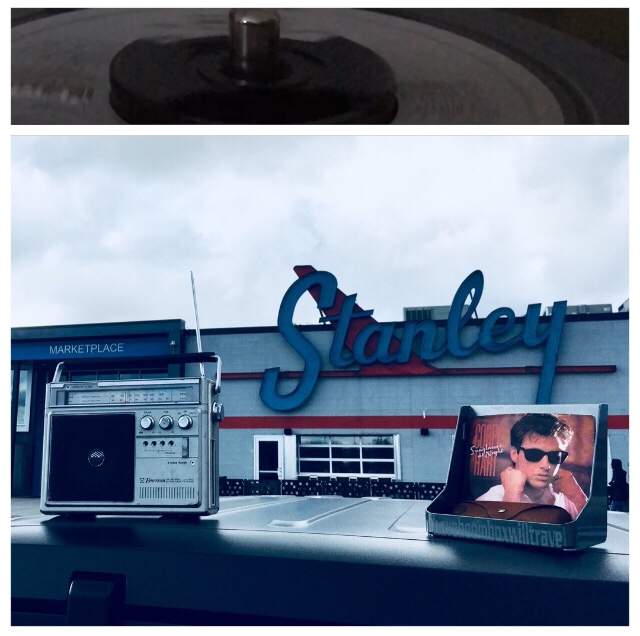 This week, we are taking the boombox to one of the coolest spots in the Denver area; the Stanley Market. We spent some time on the first Thursday of the month at the Denver Bazaar hosted in the warehouse space at Stanley Marketplace in Aurora. Local vendors were at the event showing off their best and brightest. Cider, beer & spirits flowed as participants can browse local artisan wares, records, jewelry and even a new dice game (if you want to really shake up a game night). Entry is free, but beverage tokens(and collectable glasses) will cost a nominal amount to hold on to as you talk music with the dj spinning soul records or the cider vendor.

But outside of the actual event still lies a group of very distinct and committed brick and mortars set up in the Stanley Marketplace. Food favorites like Denver Biscuit Co., Sweet Cow Ice Cream, Glazed and Confused Donuts are open to serve while you can also check out Zero Marketplace (an eco friendly concept) or even get your haircut at the barber on site.

Honestly, places like this provide a glimpse of what I think the future of IRL shopping is transitioning to. It’s not truly a grocer, yet it’s not a mall. It has open spaces for patrons to relax. It’s inviting and presents as community focused.

I selected “Sunglasses at Night” by Corey Hart because outside of maybe Ray Charles, The Blues Brothers, and Men In Black very few artists have done more for Ray Ban Sunglasses. Sunglasses are the epitome of cool to me; possibly because sunglasses signify for me freedom to be out and about. Anyone in the working corporate world might be able to attest to the climate controlled status quo which is met. And while I am thankful for the work, walking into the sun on a lunch break is a true joy.

I am a fan of the “before they were stars” pieces of the late nineties which highlighted the lives of film and music stars before they made it big. Seemingly, narration from a selection of John Quinones voice actors would say something along the lines of, “Want to know if George Clooney ever scrubbed a toilet? Stay tuned to find out.” The show would display awkward high school yearbook photos and talk about someone’s humble beginnings. Other than humanizing the celebrities (because everyone has at least one awkward teen photo), the conditions by which the parties grew up in were never luxurious. That gave me hope, although I recognize that my middle class upbringing was nothing to truly scoff at.

I remember seeing a photo of Jay Z’s high school photo in sunglasses and I thought that it looked so cool. “Who wears glasses indoors?” I thought. Also, in an era of film, there are no second chances on nailing that perfect yearbook photo.

So, as I was graduating college, I decided that I was going to add the style to my repertoire. What I had not considered was the finesse required to pull the look off.

When you graduate, you hope for a quick ceremony and formalities. If you are lucky, the speaker is wise and concise. However, when you try and pull off wearing sunglasses as you cross a stage and shake the president’s hand and no one tells you where the camera’s are. You end up looking, well, blind.

And not to poke fun at the visually impaired in any way, but I have decided that every graduation moving forward from me will include a visit from #theblindgraduate. I embrace the absurdity and own the outcome.

The irony to me in that wanting to appear in a certain way and completely missing the mark are how many of our goals start out. But those determined to get up from falling flat and learn something from it are the most interesting people I know. Flaws are not what define us, but set us apart as experienced and hopefully wiser as a result.